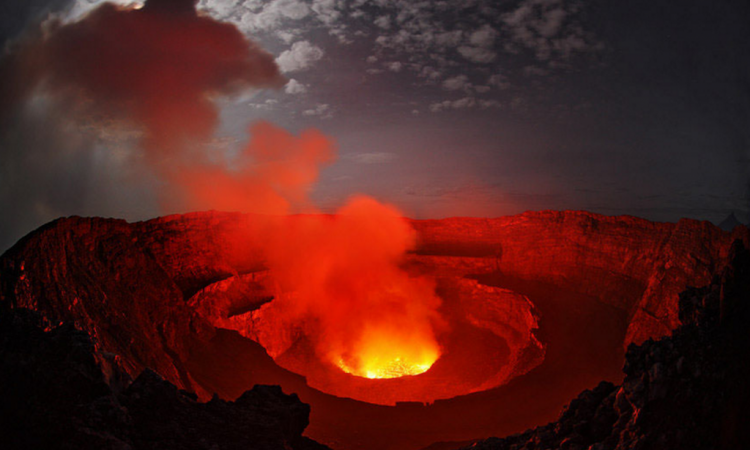 Nyiragongo Altitude & Temperature: Nyiragongo is an active volcano found in the Democratic republic of Congo and is estimated to have an elevation of about 3470m. It is one of the eight Virunga mountain ranges that is shared between DRC, Rwanda and Uganda. It is located about 20km from the town of Goma into the Virunga National Park. Its home to the largest lava lake in the work which is estimated at 2km long.

The depth of the lava lake varies and at this point there are two distinct levels recorded, one at 3,175m and the other at 2,975m. The next nearby mountain is Nyamuragira and these two are responsible for about 40% of the total volcanic activity in Africa.

Before 1882, not much is known about the activity of this mountain but since then it as erupted about 34 times with the most recent eruption happening in 2002 and there is still activity going on even up to today but it is limited to the lava lake.

Lava eruption at mountain Nyiragongo are often highly fluid and the lava can flow at a speed of a about 97km/hr unlike the Hawaii volcanoes that have about 20km/hr speed.

The Temperatures usually vary between 10°C to 30°C they are rarely above 31°C or below 8°C.

Nyiragongo being a volcano everyone would expect that it’s a very hot place but you will be surprised that it is snow-capped on the top.

Our customer support team is here to answer your questions. Ask us anything!
Hello, I am here to help you
Chat with Us